Libor Šmodas – g
and his friends

Libor Šmoldas performs with many top Czech, European and American jazz musicians. He has released eleven albums under his own name, and his quality has been recognized by the professional community with a number of prestigious awards. In the Czech Republic alone, he has performed over two thousand club concerts - and now you too have the opportunity to see, hear, be inspired and maybe even learn something.

Libor Šmoldas was born in 1982 in Olomouc and now lives in Prague. As a child he played flute and trumpet, and at the age of 12 he started playing guitar. After his beginnings with rock and blues bands he switched to jazz. He received his musical education and first experience at a music grammar school, then studied at the Jaroslav Ježek Higher Vocational School and at the Janáček Academy of Performing Arts in Brno. He completed his studies in 2018 with a master's degree at the HAMU in Prague. He went to the USA to gain experience for the first time in 2009. 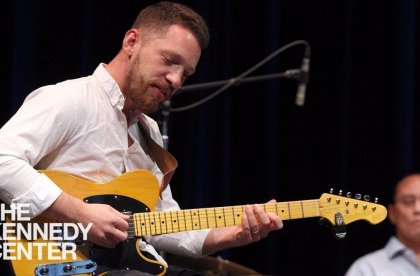